Three Belgrade architects: Milorad Macura, Rata Bogojević and Bogdan Bogdanović, submitted their plans at the competition for the Memorial Collection building project, which was announced on May 6, 1958 by the People’s Committee of the Novi Sad Municipality. The commission awarded the first prize to Bogdan Bogdanović, but none of the projects was given a green light for realization. At the invitation of Pavle Beljanski as the president of the jury, the architect Ivo Kurtović subsequently submitted the project, which was rated as the best. 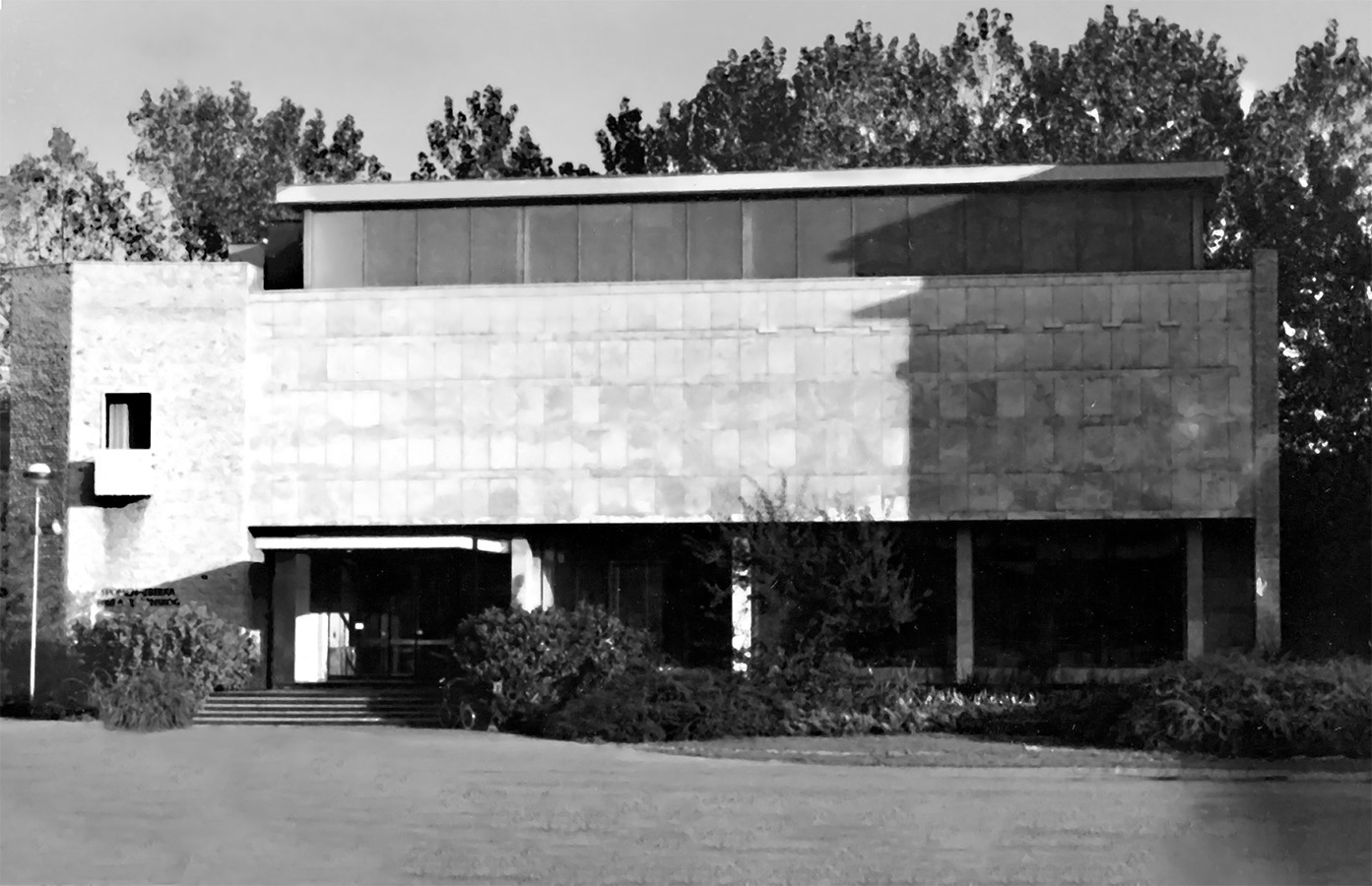 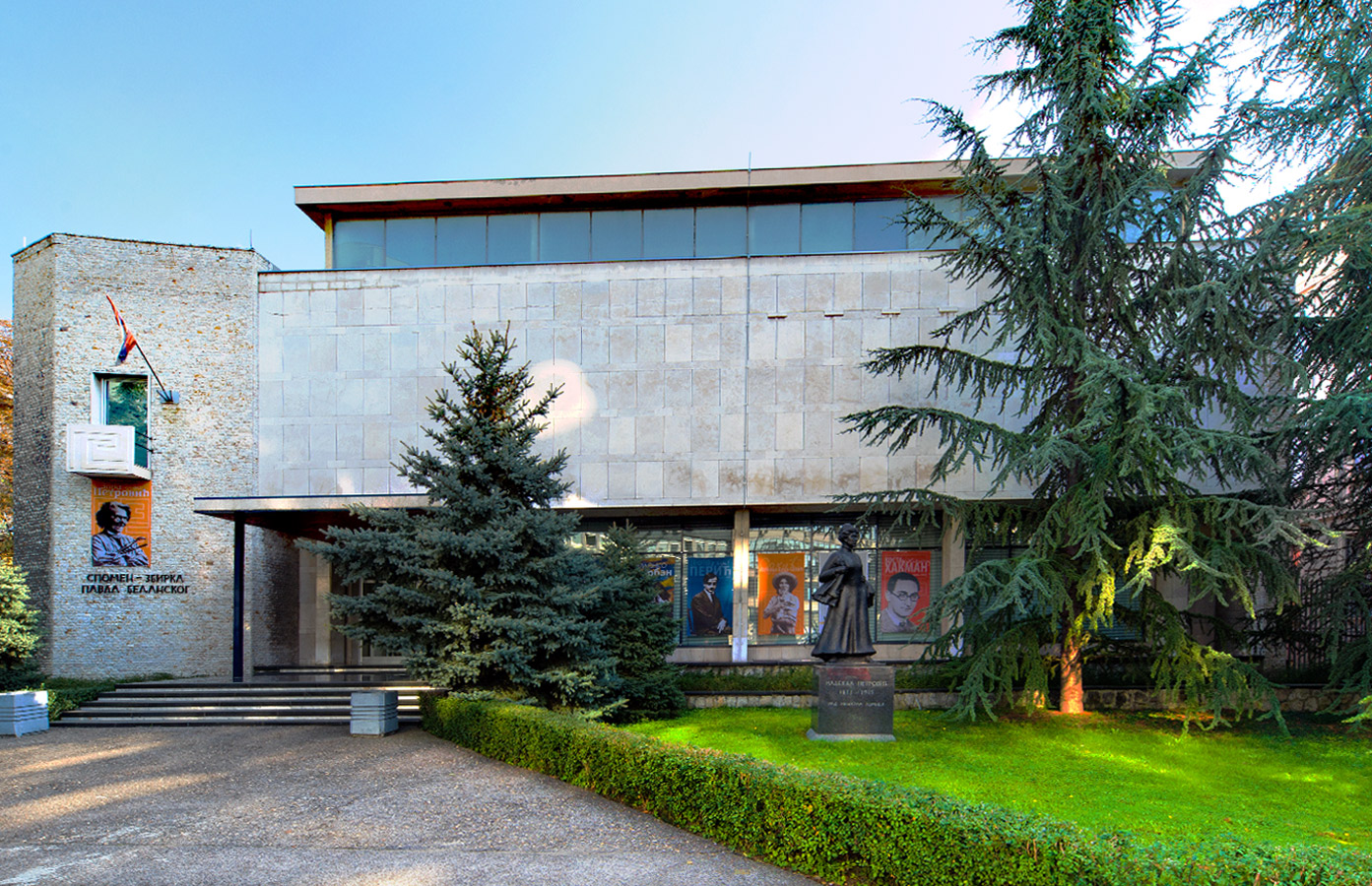 The building consists of two units that merge at the entrance and the hall, transposed in relation to the central axis. The original plan included a curator’s office and a cloakroom on the ground floor and an exhibition space in the right wing. The upper floor holds six exhibition rooms, arranged in a continuous circle flow. Divided into unequal components, the floor has natural zenithal light coming from horizontal skylights. The room on the northeastern part of the floor was originally conceived as Pavle Beljanski’s office, which he never used. The Artist’s Memorial was opened there in 1971, intended for occasional exhibitions that would focus on the lives and work of artists whose works belong in the collection of Pavle Beljanski.

While he was sketching plans of exhibition spaces, Kurtović considered the needs and features of the collection, but also the different views obtained by moving through them. By combining modernist architectural motifs with the traditional rustic architectural construction, by applying the different treatment of exterior and interior surfaces, as well as using various textures, Kurtović generated the dynamism of space and rich light effects switching between bright and dark. Because of this, the building of The Pavle Beljanski Memorial Collection represents an exemplary fusion of function, construction and shape.

The almost austere appearance of the building is softened by the greenery that surrounds it. On the lawn in front of the building, there is a monument to Nadežda Petrović erected in 1995, which was created by Dragan Perović based on a model by Mihajlo Tomić.

After the death of Pavle Beljanski in 1965, his heirs donated paintings, furniture and collector’s personal belongings to The Memorial Collection, which served as a suitable occasion to open another exhibition space. According to the project of Katarina Babin, an extension was added along the southeast side of the building without disturbing the original architectural composition. After its completion in September 1966, The Memorial Collection was opened to the public for the second time. The ground floor of the extension now included another office for curators and a depot, while The Pavle Beljanski Memorial was placed on the first floor. The memorial was ceremoniously opened on November 24, 1968, on the occasion of the first ceremony of The Pavle Beljanski Memorial Collection Award.

The functionality and aesthetic qualities of The Pavle Beljanski Memorial Collection’s design is a significant architectural feature of Novi Sad and one of the most successful purpose-designed museum buildings in post-war Yugoslavia.

The architectural value of the Memorial Collection was confirmed by the proclamation of the building as a cultural monument by the Decree of the City of Novi Sad Assembly on September 24, 1992. Do.co.mo.mo. Serbia (National Branch of the International Committee for Documentation and Conservation of Buildings, Sites and Neighbourhoods of the Modern Movement in Architecture – Do.co.mo.mo. International), has listed it among the most important buildings of modern architecture in Serbia.

Ivo Kurtović (Sutivan, the island of Brač 1910 – Belgrade 1972), an architect, a professor at the Faculty of Architecture in Belgrade and a painter, graduated from middle school in Split, and studied architecture in Belgrade (1950). During the Second World War, he stayed in Egypt and taught architectural design at the military base in El Shatt (1945-1946). After the war, he was engaged in projects for the country’s renewal and development as an employee in the Ministry of Construction, Jugoprojekt and Srbija-projekt. He worked at the Faculty of Architecture in Belgrade since 1958 as an assistant to prof. Milan Zloković on the subject of Building Design. In June 1961, he became a docent, in 1963 an associate professor, and five years later the head of the Design Department. He was engaged in projects for residential, administrative, business, traffic, tourist, educational, cultural and multifunctional purposes, interiors, furniture, as well as urban solutions for particular cities. In addition to The Pavle Beljanski Memorial Collection, he worked on projects for the Military Museum (1949) and the Museum of Hunting and Forestry (1954) in Belgrade.

His projects from the 1960s contributed to foundation of the designer school of Belgrade’s modern architecture. Some of the most important architectural examples in Serbia are: “Danube” Insurance (1961), Foreign Trade Chamber (1961) and the National Library (1972) in Belgrade; The Pavle Beljanski Memorial Collection (1961) in Novi Sad; Administrative building of the Djerdap Hydroelectric Power Plant (1975) in Kladovo.

The location for The Memorial Collection building was chosen on the former Square of Proletarian Bigades (since 1992 known as the Gallery Square). The square began to expand after the First World War, when Novi Sad’s development fostered following the modernist principles of architecture. According to the city’s 1933 urban plan, the square was originally conceived as a commercial area with the buildings such as the Stock Exchange and “Habag”, the bearers of the city’s economic commodity. There was a park on the square with a flower alley surrounded by trees. After the Second World War, at the time of Novi Sad’s rapid development, the access from the square to the main supply roads was cut off due to the construction of Marshal Tito Boulevard (today Mihajlo Pupin Boulevard). Furthermore, a subsequent urban adjustment approved the construction of an office building that represented an additional barrier between the square and Mihajlo Pupin Boulevard.

Alterations of the square from a commercial to a gallery area began in 1958, when The Gallery of Matica Srpska moved into the Stock Exchange building, followed by the opening of The Pavle Beljanski Memorial Collection (1961) and The Gallery of Fine Arts – Gift Collection of Rajko Mamuzić (1974). One of the unfavourable features of the Gallery Square is the parking lot that occupies a large part of it, which represents an inconsistency with the very name, showing that we live in a world of pronounced contradictions and conflicting demands for preserving the tradition and cultural potential of Novi Sad on one hand, and the necessity for an increasingly dynamic way of city life on the other.

There are few cultural metropolises that have three reputable institutions concentrated on such a small area, together providing an insight into national art from the 17th to the 21st century. In a way, these three museums represent a local version of the “Museum Mile”. Their physical proximity and the continuity of heritage they preserve have enabled the creation of joint activities such as thematically related exhibitions, film screenings, promotions, exhibition openings and expert audience guidance. In anticipation of reaching full cultural potentials of the Gallery Square, events organized by all three institutions will remain an important indicator of how valuable this museum site really is: Museums for Ten, International Museum Day and European Night of Museums, but above all, Summer on the Gallery Square, which on summer evenings offers to its visitors a variety of cultural content and whose popularity is growing rapidy every year. To sum up, the square is recognized not only as an important cultural factor of Novi Sad, but also of the entire region.